Super Cosplay War Ultra is a superb one-on-one fighting game in the same vein as Fighters Kyodotai, previous fighter from the same design team: Alicuu from Taiwan. Similar to Kyodotai, SCWU sets itself apart from other freeware fighters with excellent gameplay, fluid animations, a staggering number of combos and secret characters, and top-notch graphics. As the name suggests, the fighters in SCWU are cute shrunken-head ("SD" style) anime characters as opposed to "realistic" characters of Kyodotai, so you may want to go back to Virtua Fighter if you find the characters too nauseatingly cute ;)

Like Fighters Kyodotai, SCWU is a big download but is well worth the wait. The game packs a lot more gameplay than many commercial titles, and will draw you back again and again to discover hidden characters, special moves, and new stages. I also find the multiple combos easier to use in this game than Fighters Kyodotai, but maybe I just got lucky :) It's also worth mentioning that the background sceneries in this game is even more detailed than Fighters Kyodotai, and the characters' attacks are more varied and better-looking. All in all, another superb freeware from a very talented amateur group. 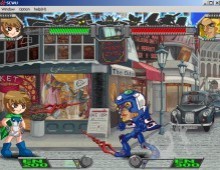