One of the first truly good two-player games, Tunneler is best described as the multiplayer version of Digger: two players (using the same keyboard, i.e. hotseat mode) each control a tank that starts out on his/her own base at a random location on the screen, deep underground. The goal is to dig a path through the soil to find the other player and -- you guessed it-- blast his/her tanks into smithereens. It's easier said than done, of course, since it takes some time to figure out where you are relative to your opponent. You also have to pay attention to some real-world concerns like fuel-- returning to your base is the only way to refuel in this game. Even with primitive EGA graphics, it's the gameplay that counts, and Tunneler has that in spades. It stands even today as one of the best split-screen games ever designed for two players. Highly recommended! 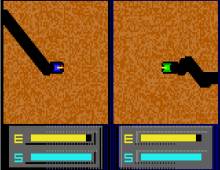 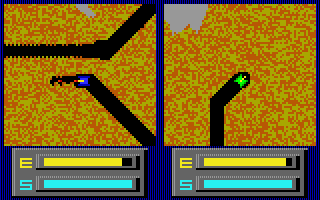