Tumblebugs is a fun head-to-head action game similar to Atari's classic Combat. The premise is simple: your goal is to chase and attack the other spaceship around the map until one of you is destroyed. There is a number of different ships, each with different abilities, and a wide range of planets to choose from.

Although the gameplay is very simplistic, Tumblebugs is a fun game - especially if you get a friend to play opposite you. Sold only through the Internet in 1997, developer Voxar stopped selling it after a few months, only to put it up again due to popular demand. The company then discontinued the game, announcing that they would release the full game as freeware. Alas, this had never materialized, and Voxar is now focusing entirely on their core business: creating 3D medical applications. If you enjoy Scorched Earth or other two-person combat game, Tumblebugs is well worth your time. The game does not boast complexity or cutting edge graphics - but classics like Atari's Combat did not need either of them to glue players to the screen. Recommended! 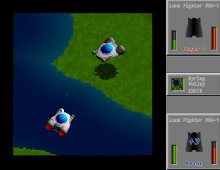