A fun Frogger clone, sponsored by Trygg-Hansa, Sweden's second-largest insurer. Developer E-Game really has a knack for creating game concepts that match the sponsor's business, and Trygg-Hansa is no exception. What better game to represent the importance of insurance than a game in which your life is at stake? ;) So we have a Frogger clone, with excellent graphics and gameplay.

For anyone who's never played Frogger (and you must be young indeed), the goal is simple: cross the roads to the other side, avoiding cars in the process, then cross the river using logs. Trygg-Hansa makes the game a bit more complicated by adding new obstacles. Once you safely cross the road and the river, the game goes to the next level, where you must deal with more (and faster) cars and shorter time limit. Overall, another nice little time waster from E-Game. 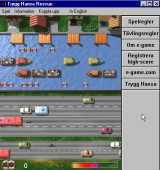