One of the best freeware games ever made with Klik & Play game creating program, Triumph! War 2099 is a cute, innovative, and fun mix of no-holds-barred action and real-time strategy genres. At first glance, the game looks no different from the likes of Destruction Carnival: kill all of your opponents' units to win the game. But the game in fact requires both tactical prowess and reflexes to succeed. This review at Total Klik says it all about why they think the game is a 10/10:

"The game revolves around you, and optionally 3 other players, commanding a legion of troops, whose soul aim is to take out the opposing alien species. Pickup flamethrowers, plasma cannons, or the trustworthy machine gun to lay into the little basta...critters.

The alien species is far from an easy target, fight 2 types of the little guys, and be sure to take out their eggs, which will continuously pump out more of the dudes. The graphics are a bit of a let down...NOT! The graphics are close to some of the coolest, and most suited in a click-game to date. The effects such as exploding barrels, bleeding aliens and birth-giving mothers all combine into one big freeware art gallery.

Triumph comes with a beautifully suited series of music tracks, and some excellent sound effects to keep your ears from excessive boredom. Gunshots, alien screams, and metamorphisizing of the critters are like a good version of a 3 Tennors concert. Though only 9 missions to complete, the game will keep you going for ages due to the sheer difficulty of the easy setting alone." If you enjoy Destruction Carnival and other K&P games but wish for more sophisticated gameplay, this freeware gem more than fits the bill. 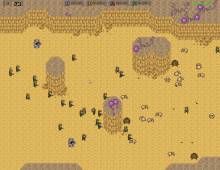