Tristan Pinball is an average pinball game with poorly done graphics, annoying sound and too little options compared to the better Pinball games. The regular different parts from Pinball games are of course included so you have a good chance of scoring points in many different ways. The actual game engine is also well done making the pinball game come very close to a real pinball machine.

Sadly there is only one table to play through which of course makes it a bit boring in the long run but at least you have a better chance getting the table to know. And that can take long enough since as mentioned above that there are many different things included in the table. If it wasn't one of the first pinball games bringing a the real pinball simulation onto the computer I wouldn't really recommend to at least take a look at it but it was one of the first which also makes it unfair to compare it to newer pinball games.

Overall a regular pinball game with a great game engine but little variation which means you will get tired of playing the same table over and over. But this game should still be in every game collection if you have pinball games in that one.

A decent pinball game from Amtex that is short on graphics and animation but long on gameplay, Tristan Pinball is billed as a "solid state pinball simulation," and it actually comes quite close to that claim. The game brings many innovations in real pinball tables to the computer screen for the first time, including Multiball, Double Scoring, Time Features, and many surprises. Ball physics are reasonably realistic, and the manual even includes primer on basic pinball skills (e.g. double flip, deflect pass, beat down, and nudging) that can be used in the game. There is only one table, and a very standard, blocky one at that, but the game more than makes up for this lack of variety and graphics by excellent ball controls and true-to-life pinball physics.

Overall, Tristan Pinball is one of those games that seem very boring and average by today's standards. However, it deserves recognition as being one of the first true pinball simulation games that bring many features to the PC for the first time. Recommended for its historical significance, even if you'll get bored with the table.

Tristan is a nice pinball game, but has too little features/options compared to most other pinball games. It has only one board to choose and no special effects are anything. 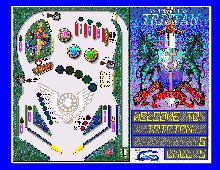 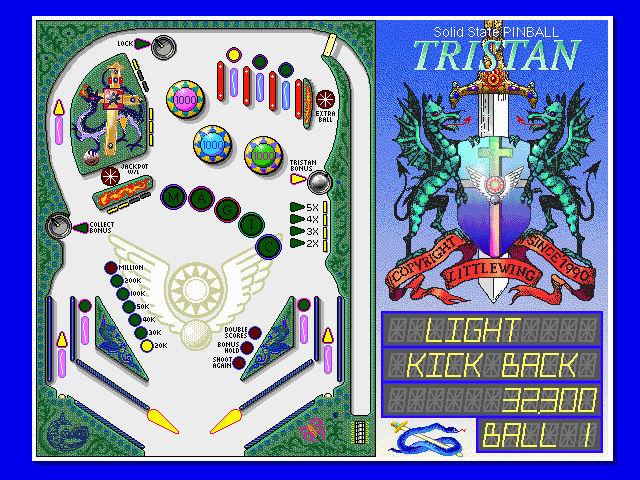