One of Probe Entertainment's earliest games is a good effort at creating an original science fiction platform game that didn't come out quite right. Trantor: The Last Stormtrooper is still notable for the bigger-than-average character graphics that make the action easy to see, and some nicely designed robotic enemies.

The very cliche save-the-world-from-robot-mutiny premise notwithstanding, Trantor features some challenging end-level bosses with creative arrays of weapons. Unfortunately, few gamers would be motivated enough to get to that point, because of several idiosyncracies. First of all, you (the stormtrooper) is equipped with a measly flamethrower that has a very short shooting range. Furthermore, you can only jump a tiny amount, and you can't shoot up or diagonally. This makes it all but impossible to avoid damage from dozens of flying enemies that hover above you at all times, not to mention artillery on the ground. This very limited movement and attack options reduce the game to a very tedious exercise of keep-the-fire-button-pressed-while-jumping. Boring, uninspired, and definitely not worth anyone's time. Fortunately, Probe's subsequent Savage and later platform games are much better than this ancestor. 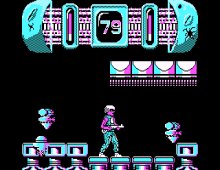