Tony and Friends in Kellogg's Land

Tony and Friends in Kellogg's Land is a decent clone of Super Mario Brothers starring cartoon characters that populate the covers of Kellogg's cereal boxes. You play Tony the tiger who must journey across Kellogg's lands to meet some friends. Similar to Mario, you will collect coins and other bonus items, and stomp on enemy creatures to get rid of them. Bright, colorful graphics and good gameplay that isn't too hard makes Tony and Friends ideal for young action gamers everywhere, who are probably the intended audience anyway, judging from the fact that I haven't had any cereal for a long time and have already forgotten most of the characters in the game ;) 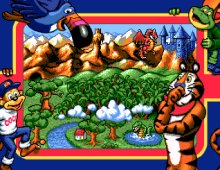