Thomas The Tank Engine and its sequel are two fun action games for kids based on the popular kids' stories of the same name. For those who aren't familiar with the books, Thomas The Tank Engine is over fifty years old. The stories of British Railway locomotives with smiley human faces were created by Reverend Wilbert Awdry, as a way of entertaining his son Christopher as he was recovering from scarlet fever. The first book was published in 1945, starring Edward the engine. Thomas, which became the series' most popular character, did not appear until 1946. Christopher is now keeping his father's legacy alive by creating more Thomas stories for children all over the world. The series has been translated into numerous languages, turned into syndicated TV series, and licensed to produce a wide range of toys, board games, and of course computer games.

Fans of the series will be delighted to learn that Thomas The Tank Engine games by Peakstar/Alternative are very faithful to the series. Best described as "side-scrolling action games for kids," both Thomas games feature colorful graphics, user-friendly interface, and rather simplistic gameplay that kids can get the hang of very quickly. In the first game, you as Thomas must undertake 6 delivery missions of varying difficulty levels. The missions range from delivering medical supplies to the hospital, to taking children to the seaside, etc. Gameplay is a simple matter of steering Thomas on the rail track, but you must be careful to avoid collision with other locomotives and variou obstacles. Thomas needs fuel to run, so you must also pick up fuel along the way. There are also bonus items to collect and time limit (although it is very generous). The game also comes with a bonus memory game you can play against the computer, with cards showing pictures of locomotive characters from the book. The second Thomas game, also published by Alternative, is a 2-player racing game that you can play either against a friend or the computer. The idea is simple: choose the 2 locomotives and track, and it's off to see who can reach the finish line first. The race makes the game more exciting than the first game, although the basic concept remains the same since you cannot go anywhere except on tracks (duh).

Overall, both Thomas games are fun, family-oriented platformers that fans of the book should enjoy. Probably be a bit too dull and repetitive for adults, but great for young action fans in your family. 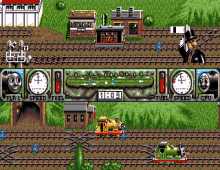