Terminator 2: Judgment Day is a boring game based on Terminator 2 the movie. In all respects, it is a formulaic film license material, i.e. a series of sub-games, each based on a certain scene from the film. The first beat-'em-up section -- a battle between the old and the new Terminator in a corridor-- is downright abysmal. Instead of feeling like the powerful battle that it should, you just poke or fire weapon leisurely at your opponent, causing damage little by little before he falls. The enemy Terminator advances ever-so-slowly towards you with a tinny growl that sounds more like a broken PC speaker than a menacing killer android, making no effort whatsoever to evade your fire.

After the slow-motion, beat'-em-up "action" of the first level, this game improves slightly with a racing section. You race a moped and see the level from the top-down perspective, trying to outrun the Terminator's truck and avoid obstacles. Unfortunately, after this high point of the game, it goes back to mediocrity again with tediously moving pieces of an ostentacious "puzzle" section. The bottom line: play any one of Bethesda's Terminator game instead... indeed, play any game at all other than this utter waste of a good film license. 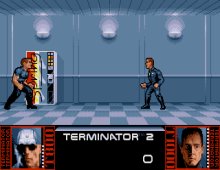