A cool Chopper Command clone, Taso is a fun little mindless game with two simple goals: destroy your opponents and defend your base. You have a wide range of choppers, each armed with different weapons, as well as some (very tiny) troopers to do your bidding. Although designed primarily for two players, the game also allows you to play solo, with a decent AI. If you like games such as Scorched Earth or Triplane Turmoil, Taso is well worth a look. It is competently coded, sports an easy to learn interface, and boasts good graphics and simple-but-fun gameplay. Good for a few minutes of trigger-happy fun, although long-term play value is lacking. Excellent playability and the great variety of choppers and enemy units are what set Taso apart from similar games. If you enjoy the concept but want more strategic options, check out Three-Sixty's Armor Alley instead. First released as shareware, the game was made freeware in early 2000 by the designer. So there is really no excuse to try out this fun little old game :) 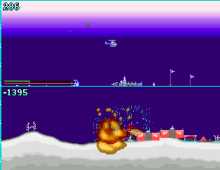