I remember that we played this one on our C64s for hours back then. Unfortunately the PC-version is not quite as good, but what can you expect from CGA-graphics - of course it looked better on the C64 (C64 version is also available at our site, in C64 section), sound was also better - the whole thing got a better atmosphere. But anyway - this is still fun. Give the customers their beer or they will get angry. You should also have a look at them sliding back the empty glasses - if they crash on the floor the game's over too. What starts as an easy thing soon gets pretty fast and challenging. I remember that 'Only one more round'-syndrome catching me everytime I played this. It's really a nice thing. I just have to warn you that you will probably not be able to play this on a Pentium-computer. I played around with moslo but even the slowest setting was WAY too fast. I tried it on my 486SX-Laptop under the slowest setting and well... it was playable, still somewhat fast, but at least slow enough to survive some minutes.

Good graphics, great gameplay-- what else does a game need? Serve beer to customers and also collect the mugs back... a bartender's job has never been better illustrated. I remember spending hours in vain on this game trying to beat my brother's score :)

This is a very, very cool game! I remember playing this when I was young, and thinking it was cool that I was allowed to play a game that had alcohol in it ;) This is a great example of a game where you play and play and play just to see who can get the highest score (like jezzball hehe). It's a very simple game really. You are a bartender, and your job is to fill up the beer glass, then chuck it down the bar to the guy, who throws it back and you fill it and then throw it back, I think you get the idea. Don't be fooled into thinking this is not a challenge, the game gets very hard and fast and you have to work hard for your precious points!

Lovely CGA graphics in pink, white and cyan! The PC speaker will be pumping out the fine beepy tunes in time to this game, although I must admit, the sound in this game is not as annoying as some. :) Overall it's a fun little game, not very big, and well worth the download. Great classic gameplay indeed! 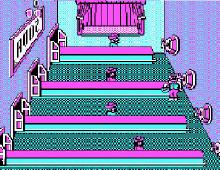