Super Bubsy is a little-known platformer gem from Accolade, optimized for Windows 95. As MobyGames describes, the game stars Bubsy the Bobcat, the cartoon hero "....[in] Claws Encounters of the Furred Kind. [You] have to collect the objects and defeat all your enemies landing on them. With witty remarks Bubsy goes through 16 levels in comical cartoon style. There is also time limit. Available for 1-2 players."

The game is cute, colorful, and quite fun - although it cannot compare to Earthworm Jim and Sonic, two preeminent cartoon platformers. Still, there is plenty to like here, from the inventive level designs, to neat bonus items to collect. Too bad it's just been done better elsewhere, and so you can't help but feel a sense of deja vu when playing this game. Recommended. 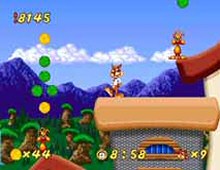 People who downloaded this game have also downloaded:
Mario Forever, Super Mario Pac, Prince of Persia 2: The Shadow and the Flame