Sumo Carrier is a humorous delivery game designed by E-Game for Sumo, Sweden's premier electronic products retailer (similar to Best Buy in the US). From the in-game description: "Help Sumo deliver all the nice things people has ordered from sumo.se. You have to deliver the packages to the customers and return to the Sumo warehouse as soon as possible. There is a time limit (the green bar at the top left corner) so you better hurry up. If you fail, you may try again, but you are only allowed three tries before you get fired. Also, look out for the cars, because you don't want to be hurt, do you?

There are two kinds of bonus symbols which you can pick up when you run into them. Besides getting some extra points these will give Sumo two different effects for a short while; invulnerability (blue symbol) which ables you to walt through traffic stops and cars, and turbo speed (purple symbol) which gives Sumo extra speed.

In order to make things a little easier you have an overview map, where the blue dot is Sumo, the white one your destination, and the red ones the cars that you have to look out for."

Sounds complicated? Not really. The game plays much easier than it sounds, although there isn't enough variety here to sustain anyone's interest for long. 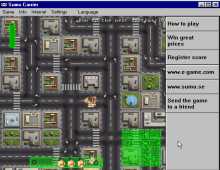