Shikun is a simple but addictive action game that sports bright anime-style graphics, fun arcade-ish gameplay, and enough surprises for multiple replays. Your goal: collect chickens using either a net or seeds which you can use as bait. Collect the required number of chickens and throw them into the pen within time limit to move on to antoher level - and eventually a new world. There are 6 worlds in the game, each with 5 levels. Each world sports its own theme, obstacle set, and even enemies. As for variety, you have 13 characters with varying stats to choose from, multiple game modes, difficulty levels, bonus items, and even a mini-game and a secret game.

Although the game looks good and plays well, there are some glitches and mar the overall enjoyment. For example, there are sometimes far too many power-ups in the scene that the flashes they give off are annoying. Also, I find the game very difficult even on Easy mode, and the evil teleport gates on some levels don't make things any easier. 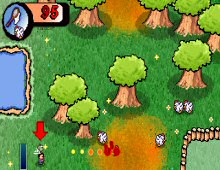