Yet another compilation by Keypunch in which the company essentially stole freelance designers' works (most released as freeware or shareware on various BBS's), took out all credits, and sold them as the company's own games. That the company was able to do this unchallenged in mid-1980s is telling of how much the Internet resembled a lawless "wild west" in its early days ;)

Strike Zone compilation includes three arcade-style flight games: Flightmare, Red Baron, and Striker. All of these games are freeware Defender-style sidescrolling shooters, and are all much better than average. You can find reviews of Flightmare and Striker on this site, and Red Baron is simply a name change for Sopwith which I also reviewed. Worth a look if you have never played any of these games before, and it's nice to see three similar games compiled into one package. 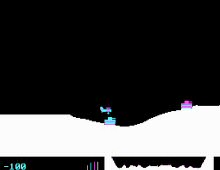