Such a nice little game - you wouldn't expect a smooth 3D-Sim from a game made back in 1986, would you? Well - surprise surprise! They really created a masterpiece here - the game itself is quite enjoying - although it's "only" shooting everything that moves. Your glider flies perfectly and the steering is accurat - absolutely no complaints. In this section the game doesn't need to hide from any of today's sims. Of course you can't really compare the line graphics of this game to the 3D stuff they are able to create nowadays - but who cares? This is just a gem you can play to kill your aggressions and it runs EVERYWHERE - you don't even need a slowdown program for it! I wish I could personally tell those programmers how well they did - so if one of them reads this - please drop me a line - ingenious piece of work!

StarGlider is the legendary (for non-PC systems that is) wireframe 3D action shooter developed by Argonaut Software and Realtime Games. One of the first of its kind ever. As typical for many games of that period, the game was a huge success on the Spectrum, Commodore 64, and Atari ST (which is undoubtedly the best version)-- but fared quite poorly on the PC.

The novella that came with the game (which was one of the hallmarks of many Rainbird games of the era, e.g. The Pawn) provides a very well-written backstrory that tells about the war between Novenia and ruthless Egrons, which disguised the Novenian's Sentinel robots and used them against their creators. You play Jason and Katra, two Sentinel repair workers who embark on a mission to destroy the invading aliens. All they have at their disposal is an obsolete museum piece of a fighter equipped with lasers and capable of carrying two missiles. Your goal on each level is to find Starglider one, a golden, bird-like craft with animated wings, then destroy it. This would take you to the next level, where basically you do the same thing again against greater opposition.

StarGlider introduces many new features to the space simulation genre. Two types of sight are available - fixed and floating - and a choice is made before the game starts. Floating sights makes it much easier to hit the target-- the crosshair "follows" targets automatically. Fixed sights makes the game more challenging by fixing the crosshairs in the middle of the screen, so you must maneuver to line up the shots. An optional centering system may be enabled or disabled at the start of the game - automatic centering can be effected on either the vertical or the horizontal axis, in all directions, or not at all. With fully automatic centering, the fighter returns to flying straight and level when it is left to its own devices.

There are more than 16 types of Egron crafts to destroy, some of which are very reminiscent of Elite, as well as their groundbased counterparts, including tanks, missile launchers and those walker robots similar to the ones in Return of the Jedi

There were usually two or three bases where you could replenish your supply of missiles. For actual refueling, though, you have to use one of the game's innovative features: fly into between two fuelling towers to recharge your fuel cells. This arrangement is complicated by the fact that the opposition would usually try to make the best of their advantage while you are a sitting duck. Yet another innovation is the missile firing sequence, where you effectively pilot your missile (not the ship) to home in on the target after firing it, via a missile-chase camera. You could also interrogate the computer when you were docked for useful information on the vehicles you encounter that may shed some light on how to destroy them.

With revolutionary spaceflight dynamics and a long list of innovative features, StarGlider ranks as one of the most underrated space sims of all time. Too bad we can't offer the wonderful novella for download here because its author, James Follett, is planning to re-publish it as a commercial novel (yes, the novella is that good :)) 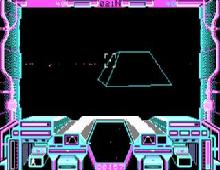