Squares X is a fun coffee break action game coded in Game Maker. The review at Gamemakergames.com says it all about one of the best fanmade remakes of addictive Flash games:

"Squares X is a clone of the popular online "Squares" game, but even so, this does not detract in any way from the fast fun and action that it has to offer. Though screenshots may yield simple, almost unattractive graphics at first, remember that looks can be deceiving—the simple graphics used within Squares X are ideal, as the game focuses much more on hyped-up gameplay.

Squares X has three total play modes that you can utilize to squeeze every ounce of fun out of this game. The first mode, Classic, is a direct copy of the original "Squares" in which you use your mouse to control a rotating black square. With this specific square, you're supposed to hit every other black square that flies across the screen; because, in addition to the black squares are red squares, and hitting these red squares nets you a game over. On the other hand, hitting a black square will net you points, but it will also make the game a little bit faster. This way, as you hit more and more black squares and raise your score, the speed at which additional square come flying at you increases, and the chances of being hit by a red square increases dramatically.

The second given mode is Survival, which is an extremely fun modification of the Classic mode. In survival, only red squares come rolling out at you, and you must dodge them all. But, the twist is in that the speed is set rather high from the start, so dodging the red squares is no simple feat.

The third mode, called "Timed," is essentially a time attack. In this mode, only black squares are thrown at you an, given a time limit, you must hit as many of them as you can. However, this is much easier said than done considering that while grabbing a square may raise your score, doing so subsequently raises the speed as well—which means that towards the end of the time limit, squares will literally zip by faster than you can flick the cursor.

As with the rest of the game, Squares X does not let you down with a superb soundtrack. The selected music is fast paced, just like the gameplay, so it suits the atmosphere perfectly; and the sound effects used never feel obtrusive in any way—quite the contrary, actually. Squares X is a great example of exactly how much excellent background music and good sound effects add to a game.

The only thing that Squares X probably lacked was an online hi-score system, and is the only thing to suggest should Royal Monkey Gaming decide to come out with a sequel. If added, Squares X will definitely be nothing short of "one helluva game." Whether or not you enjoy arcade games, you'll definitely have fun with Squares X, as it is a crisp deviation of the normal arcade genre. This game deserves nothing less than the label, "a must download."" 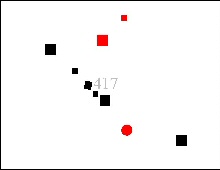 People who downloaded this game have also downloaded:
Diamonds 3D, Gal Pani X, Croc: Legend of the Gobbos, Every Extend, S.C.A.R.A.B. (a.k.a. SCARAB)