Gal Pani X is a fun clone of Qix, Taito's famous arcade game with a simple gameplay: draw lines to create separate portions of the screen while avoiding nasties. Gal Pani X takes the concept one step further by introducing new twists and a lot of fun power-ups. Instead of enclosing spaces at random, you have a specific goal in Gal Pani X: enclose areas to "open" the silhouette picture of a scantily-clad anime girl. You will pass the level once you open a required % of silhouette, and to have a level 100% done you must open up all the silhouette of the girl.

The gameplay is a lot of fun and quite challenging. You not only have to avoid the enemies' bullets, but also have to make sure their bullets don't hit the line you are drawing. There's also a strict time limit per level. On the plus side, there are many kinds of power-ups you can collect, ranging from a bomb that destroys all enemy bullets on screen, an item that will speed up your crystal (i.e. marker), or a barrier that will prevent one enemy attack. The score is calculated not only based on the % of picture you uncover, but also based on combos such as "grazing combos."

With a combination of good graphics, solid gameplay, and many fun power-ups, Gal Pani X is a very fun game that will keep Qix fans happy. The game is billed as "Doujin Soft" (i.e. program with female anime - most often adult - content), so if you are offended by nude pictures of anime girls, stay clear of this game. But then again, the worst here are scantily clad girls from To Heart, so nobody should find this offensive. 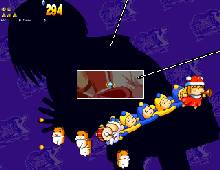