Spout is a fun arcade-ish game from Japan that is best described as an "abstract caveflier/shooter." Similar to many Finnish freeware classics like V-Wing, your goal in Spout is simply to make your way safely from one level to the next, avoiding walls, floors, ceilings, and other obstacles along the way. In contrast to a typical caveflier, you can destroy your surrounding. The trick is that you cannot just shoot you way out. Your tiny spaceship continuously "spouts" noxious fumes from its rear engine as it is propelled forward. These fumes are the only thing that can destroy obstacles in your way. Since the fumes come out in the opposite direction your ship is moving, you are forced to basically maneuver in a spiral motion - rotating the ship constantly to destroy obstacles, while trying to stay on course. It is much easier said than done, and this little gameplay mechanics is what makes Spout both fun and innovative.

The graphics takes a minimalist approach - if you have played Kenta Cho's abstract shooters like rRootage or wireframe classics like Tempest, you have no cause for complaint here. Basically your ship and the fumes are black, the obstacles are gray, and the background is white. Minimal, but it works, and you will be too busy trying to spout enough fumes in the right direction to notice anyway :) The higher your ship can go, the more your score will be. Yet another proof of how little it takes to make a fun game - in this case, a tiny pixel-size ship and some innovative gameplay. Recommended, especially for fans of windowed coffee break games. 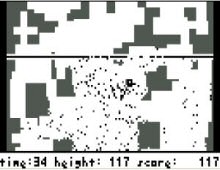