Space Strike is a great commercial Space Invaders clone. Although it's not that different from Atari's classic (and indeed, you might mistake the game for Space Invaders if you hadn't look at the title screen), the game is of historical importance as the very first PC game written by graphics wizard Michael Abrash, long before he became famous at id Software and beyond. With intuitive controls, smooth animations, and generally fun gameplay, Space Strike is a decent game for its time. It's just perhaps a little bit too "inspired" by Atari's game ;) Worth a look, especially for fans of Mr. Abrash himself. 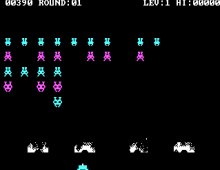