A very simple but still amusing game. The game is simple. You fight against a bunch of kids with snow balls and you have to hit all the other kids in order to win the level. The levels aren't getting much difference as you go through them. It's not very hard to hit the other kids but it can be a skill to avoid getting hit yourself in the beginning of the game. After playing it for some time you will proably find the tactic where you can't get hit while you are still able to hit the other kids pretty easy.

Both the sounds and graphics are really good and while the game is simple this makes it up for the game but don't forget that Snowcraft is a simple made freeware game without too many features which it probably wasn't supposed to have anyway. I'm pretty sure though that you could make a pretty funny game if you design new levels and add a few more "weapons". Of course that is just my idea. If you are in a winter mood and want to use a little time on a great and funny game Snowcraft is very recommended.

A cute little game that obviously takes its inspiration from a similar-sounding Blizzard blockbuster, SnowCraft is a fast and furious action game that features very smooth graphics, simple yet addictive gameplay, and that magical "just one more level" appeal. The goal is simple: win a snowball fight by maneuvering 3 little kids. The user interface is very intuitive-- you can move your little troops around, and even adjust the power of the snowball just by clicking and holding mouse button. The first battle pits your team against 3 opponents, but as you win more battles, you face more opponents who are more adept at avoiding your snowballs, so only action experts will be able to win the first few battles. With attractive graphics and addictive yet simple gameplay, SnowCraft may not be the ultimate stocking-filler, but it's ideal for whiling away a few minutes during coffee break... especially when it's snowing outside. 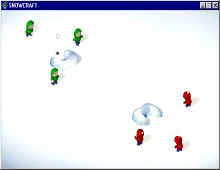