Back to the old days. Where (a small) size was more important than the graphics. The glory days of ASCII games. Addictiveness was the trump card. How do you achieve addictiveness fast? By keeping the game simple, remember Tetris? Sokoban? Boulderdash? Pac-man? Snipes is of the same caliber.

Imagine yourself a big maze. You're alone, completely alone. The only thing you now is that you must conquer the maze by killing all your enemies, the snipes. And not only the snipes, but also their hives. Strategy, fast thinking and sharp reflexes are the key to victory. The only key.

The game is, as mentioned earlier, pretty simple. You control your creature with the arrow keys and shoot with A, W, D and S in the appropriate directions. And when you panic, press the spacebar for some extra velocity. How much easier can it get?

But not only simplicity is an important aspect of a game. Replayability is another great thing. In Snipes this is achieved by letting the computer generate a new maze every time. You specify the amount of snipes, hives and difficulty before you start and of you go. Because you can configure everything there are a total of 26x9 difficulty levels. Ranging from A1 (easy, nothing special, 3 hives, a maximum of 10 snipes and five lives) to Z9 (hard, reflecting bullets, electric walls, ghosts, 10 hives, a maximum of 150 snipes and two lives). What more do you want? In addition to being an excellent game, Snipes must also be recognized for its place in history as one of the first network games ever written. In fact, the Superset Software designers later became Novell, one of the largest and most successful network software companies. 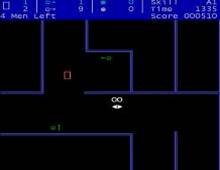