Here it is, the classic amongst small action-packed games, Skyroads. This game packs hours and hours of gameplay into 600k of data. Fast-paced action calls for alert reflexes.

Then what's the goal in this 'oh-so-good' game? Well, it's simple. YOu have your everyday skycar, with which you can jump across gaps. The problem is, it's not just jumping around which will get you through the game. No? No. Okay, what makes it more difficult then?

Well, you have fuel, like every single machine in the world has, and that fuel MAY or MAY NOT run out at times. Furthermore, there are some tiles on which you either explode, accelerate, slip or anything else I missed. These make navigation hard at times. Don't forget the tunnels either. These can make deadly traps if, for some odd reason, the floor is missing all of a sudden :)

All in all, a small, but pretty game. Good graphics, nice sounds, and definately a good feel.

Oh yeah - I love those futuristic racing sims. Although this game mainly requires skill. The tracks are really challenging - usually you don't make it to the end in the first tries. The key to success is knowledge of the track. You have to know when to jump and when you have move to a side to catch the entrance to a tunnel. Yes, you can jump over some of those tunnels - but sometimes you won't be able to catch the next part of the track then. The game is not easy, but fun, presentation of the concept is very well, controls are accurate - good game.

This is the first "space racing" games I've ever played, but absolutely not the only one. Still, you can see that there has been alot of thinking involved in making this game.

The galaxy you're in also influences the way you're driving, some have less gravity and you will be able to jump higher. Some have more gravity and so on...

It's a nice game to play and it is really worth replaying a couple of times, so go on! Grab this one!

Skyroads! well when I first saw this game up for download, and saw the 600kb or so download size and the fact that I have never heard of the company that distributed or made the game, I thought it was going to be a wasted download and a waste of my time just unzipping the archive! But after I unzipped it and started the game, the first thing you see is a kind of nice looking merging of the word 'skyroads' and the cool sound of the ship going off into the distance.

To put it simply, the game is quite basic, there's no plot because it's just an arcade game. As far as I know there are no enemy's to destroy, all you really have to do is in your ship, you fly a short distance above some sort of thing in the air, and you have go stay above it or you'll fly off into space and die, you also have to avoid obstacles by jumping them or going around them or you'll just end up blowing up!

The graphics for the game, well, they're ok, the only good graphics in the game is the backgrounds of each level which look really cool as you can see in the screenshots, other than that, the other graphics are quite bad, they're just pretty basic 3d looking graphics, no texture on any of them, except for maybe a bit on the ships, There isn't a lot of sound in the game, there is the usual annoying repetitive music playing in the background, there are no engine sounds, but there are sounds of the craft bouncing after u have jumped over something and also an explosion sound after crashing your vehicle in to an obstacle.

This plays like a standard arcade game, in that there is no computer AI, there is just a set amount of levels to play, with each level getting more and more difficult when u progress. The first level is really easy, the last level, which I had a go at, is extremely hard, I could barely get past anything in it, which makes it quite addictive because it's so damn hard.

All up a quite difficult but mainly basic game from Blue Moon Software, the graphics could have been better though! 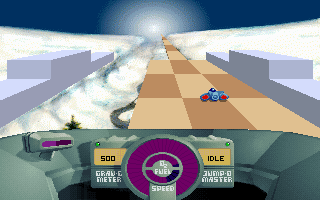