Sky Shark is a faithful conversion of early Taito classic arcade game. A top-down shooter similar to Raiden, Sky Shark is much more accessible to beginners due to more forgiving enemies and a generous number of starting lives. You start the game with four lives and three bombs, but you can get many more in the game.

The name of the game refers to your call sign, i.e. "Sky Shark" of a nondescript World War II squadron. Your goal: blast through five levels with as many as six gun upgrades. Although most levels look similar to each other, the end-level bosses are appropriately tough to kill, and good music and animations make the game a pleasant time waster. With three difficulty levels and two-player hot-seat support, Sky Shark is a well-rounded shooter that deserves not to fall through the cracks of time :) Recommended, although by no means a must-have.

Just an good old topdown shooter. But the graphic part is a littlebit strange. For explosions strange colors are used. The music is nice. 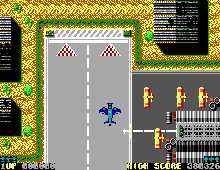 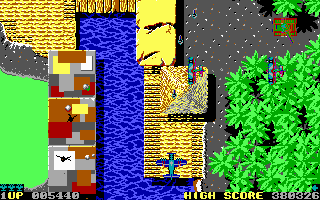