Sinaria: Lost in Space is a fun, bang-for-your-buck shareware platformer that boasts surprisingly varied and addictive gameplay despite amateurish graphics. Similar to most other games in the genre, the plot is insubstantial and negligible: the world of Sinaria is under threat from the evil Stomper (no, I'm not making this up), and it's up to you to stop him and return peace to the land. The gameplay is the familiar side-scrolling action fare, except Sinaria includes all the cool features from various games that make it a lot of fun, especially secret passages and many creative weapons scattered throughout. A very nice touch is the inventory area, which allows you to keep multiple weapons and toggle between them whenever you want. Another great design feature is that a lot of power-ups in the game is used to solve physical puzzles similar to adventure games: Saturn Ball, for example, is used to squeeze into tight places, while Swivel is a tool used to swing on special tiles similar to the whip in Castlevania. With plenty of cool power-ups, huge levels, and excellent level designs, Sinaria has plenty of play value that rivals commercial games, although its graphics are unfortunately amateurish and blocky. Worth a look. 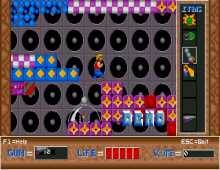