SCUD: Industrial Revolution is a decent top-down action game based on SCUD: The Disposable Assassin, a wacky and successful comic book hero created by Rob Shrab in 1993. You control SCUD, the yellow coin-operated assassin robot as he blasts his way through multiple levels, battling humanoid, mutant, and robotic enemies.

Industrial Revolution succeeds in capturing the hipness of the original comic book, with cartoony graphics, wacky sense of humor, and plenty of action. The gameplay is similar to Raven's Take No Prisoners, except that it is much more stylized. The controls (keyboard and gamepad are supported) are very smooth and intuitive, with multiple control schemes you can choose from. All the important information is displayed in an unobtrusive, easy-to-understand manner: SCUD's health, radar, and weapon arsenal are always displayed on screen. The game, like Take No Prisoners, is fast-paced and quite difficult, since you constantly have to deal with dozens of enemies at a time, and many power-ups and bonus items are hidden in obscure locations. The levels are neither as varied nor interesting as Take No Prisoners, but they are different enough from each other to provide fresh challenges.

Overall, SCUD: Industrial Revolution is an above-average action fare that does not set any new standard, but sets itself apart from run-of-the-mill games with a unique and stylized graphical style. If you are a fan of the comic book, you will definitely like this computerized version. 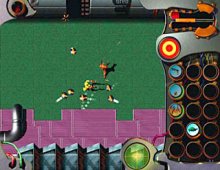