ScubaVenture is a fun, early Apogee platformer by George Broussard that relates to id's blockbuster Wolfenstein 3D in an interesting way. Here is the lowdown from Lon Matero's superb Apogee Page:

"Apogee's Vice President George Broussard wrote a game for Softdisk under contract called ScubaVenture, which was published as part of a defunct monthly game disk subscription from Softdisk and also sold as a stand alone item. ScubaVenture came about when Scott Miller, intrigued by id Software's Catacomb 3D, wanted to contract id to make a 3D shareware game for him. id was reluctant, instead intending to make another Commander Keen game, but Scott Miller gave them several proposals all of which guaranteed a large sum of money. However, id was obligated to make another game for Softdisk, so Apogee made an arrangement whereby Apogee would make a game for Softdisk, thus freeing id to write a 3D game for Apogee. id's game for Apogee was, of course, Wolfenstein 3D, and Apogee's game for Softdisk was ScubaVenture.

I think Apogee made out well on this deal. How many of you have heard of ScubaVenture, as opposed to Wolfenstein 3D? :) ScubaVenture takes place inside the shipwreck of the Barbarosa and is it filled with treasure. Your objective is to gather all the treasure and to survive all of the creatures that lie inside the ship. There are a total of eight levels and to complete the level, you must find the special treasure and find the exit. You are also armed with a spear gun and bombs to defend yourself against the sea creatures. I believe ScubaVenture uses the Commander Keen engine, and this game reminds me of "The Well of Wishes" level in Keen 4, with the scuba gear and Dopefish. Also, even though this is a Softdisk game, the credits say it was an Apogee Software production." 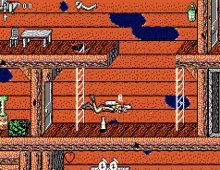