SWIV 3D is a fun follow-up to SWIV, classic Amiga overhead shoot-em up which was in turn the sequel to Silkworm. Games Domain said it all about the appeal of this vastly underrated gem in their review:

"Instead of the top down view of the original, you get a proper 3D view, from behind whichever vehicle you are controlling, which looks damn good. And you're no longer stuck with flying one way, towards a fiery death. You can now roam all around a 3D landscape, in whichever direction you want. Imagine Magic Carpet with missiles, and you have some idea of what SWIV 3D is like. To complicate things, it's no longer a case of mindlessly blasting whatever comes towards you, and trying to survive till the end of the level. You now have a number of objectives which must be completed. These are mainly of the 'seek and destroy' variety, which have you nipping around the landscape, taking out an enemy installation, before flying off to your next objective. A compass is provided, which automatically points to the direction of the next objective, avoiding any embarrassing 'stopping and asking for directions' situations.

In SWIV, you picked whether you wanted the helicopter or the jeep at the beginning of the game, and then you were stuck with that throughout the game. In SWIV 3D, you change modes of transport throughout the game; you start off in either the helicopter or the jeep, and there's usually a point somewhere on the level where you can change over to the other means of transport. This adds a tiny bit of strategy to the game, though not enough to deter shoot-em-up freaks. The helicopter is fast, with a wide turning circle, and can move from side to side, to avoid incoming missiles. This means you can usually get away with flying over a base, letting lose your weapons, and zooming over a hill before the enemy can retaliate.

However, there is one related gripe I have, and this is the only thing I could find wrong with the whole game; the helicopter and the jeep share the same shields. What this means, is that if you have about one point of energy left in the jeep, and you switch to the helicopter, you've still only got one point of energy left, and one hit will be enough to take you down. If there had been different shields for each craft, it would have given you a reason to change craft, till you could find more energy. It's not all that annoying, though. To make things a little easier, there's the obligatory selection of weapons to pick up. These include homing missiles, smart bombs, napalm, power-ups, and a smart bomb. The latter unleashes a nuclear explosion, which sends a shockwave across the ground, taking out most things in its way. Except you. And you can take weapons from one level to the other, so if you finish one level with four homing missiles, you can keep them for the next level. And you'll need them. The default weapon is a not particularly effective blue plasma gun. Not what you want to be armed with when you're being chased by six enemy helicopters.

SWIV 3D is fun to play, too. It has that 'just another go' factor, and the difficulty is pitched just right. While you might get your arse kicked the first time you play it, you'll find that each time your getting your arse kicked less and less, as you get better at the game. In conclusion, I'd like to say 'Die, invader scum! Die! Die! Die!'. Sorry, what I meant to say was that SWIV 3D is an excellent game, easily one of the best if not the best shoot-em-ups available. Get it, or regret it." 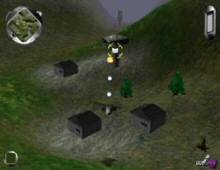