Safari Guns is an above-average first-person shooting gallery game, except in this game you have to shoot both bullets and pictures. Your job is to photograph a certain number of safari animals to pass each level before the film runs out. But at the same time, you must also be quick enough to switch to rifle to shoot the poachers before they shoot you. Requiring you to switch between the camera and the rifles is a nice twist that sets the game apart from other shooting gallery games, although the gameplay is still the same basic shoot-reload-shoot affair. Safari Guns is worth a look for its novel twist, but doesn't have enough gameplay variety to capture your interest for long. The variety of animals you can shoot is nice, though. 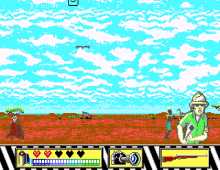