The Rift is a decent little vertical shooter in the same vein as Space Invaders. The game was never sold, but given as "free gift" to people who registered Pop Software's shareware products. There isn't much I can say about the game, except that the enemies look quite nice, with shadows that give good illusions of 3D. Even enemy shots look 3D, which makes the game one of the better-looking freeware shooters at that time. Too bad the background graphics is minimal - but then again, how much should we expect from a 1992 freeware game? :) I find levels 1-3 too easy and level 4 too hard (and almost incomprehensible), so die-hard SHMUP fans definitely shouldn't expect the game to last them hours. All in all, The Rift a pleasant little diversion and rarity worth preserving. 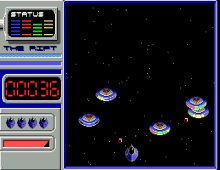