But graphics, as countless examples have shown, cannot save a game if it is no fun to play. Fortunately, The Reap not only lives up to Housemarque's early reputation as maker of Stardust games, but also exceeds it with even better graphics, bigger worlds, and more furious action. Although four worlds may sound too few for a SHMUP game, each world is so large and so difficult that it will take expert gamers a few hours (and blistered thumbs) to get through it. Dozens of special effects and a catchy soundtrack round off this highly-polished game that is a good example of how good-looking a PC game can be without sacrificing speed or playability - and that is no small feat given 1997 hardware. Highly recommended. 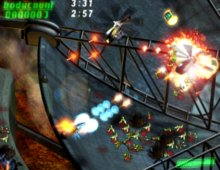