Very addictive Strategy/Action/Tetris-Crossover. Shoot the ships, build up your castle - sounds simple, but it isn't, coz' the castle-building is done in Tetris-Style. Well, I like this game very much. It's great for some action and puzzlin', you can play it for a few minutes during lunchbreak or so (but beware, there is a chance, you'll stick to it for more than just five minutes!). Very unique idea I think, just try it out, even got multiplayer-mode.

Like all good arcade games, Rampart is easy to learn but hard to win. The goals in the Combat Phase in one- and two-player games are slightly different. In one-player game, your goal is to sink enemy ships, while the goal is to destroy enemy castle walls in two-player mode.

What makes Rampart different from most arcade games, and what makes it a lot of fun to play, is the great combination of action and strategy elements. Before you can enter the Combat Phase, you must first strategically place the cannons within the castle walls. After the Combat Phase, you move into the Repair Phase in which you can repair your walls. In this phase, you can also place (randomly created) parts of walls over the landscape to gain more territory to place cannons on. There is a time limit for placing walls, so your friend won't have to twiddle his thumbs impatiently while you scrutinize all strategic locations ;)

With excellent graphics and the same solid gameplay that fully retains the addictiveness of original arcade hit, Rampart is simply a must-have for action fans, and even strategy fans who fancy a bit of action. The music is a bit dull, but that's a very minor nitpick. Highly recommended, especially if you can find someone to play against in the two-player mode. 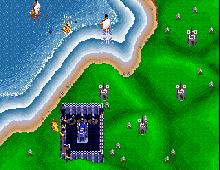 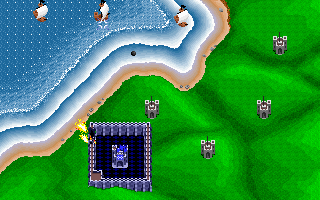