Without a doubt one of the most (if not THE most) entertaining ASCII games ever designed, Pyro 2 is novel in both gameplay and concept: you play a pyromaniac with fulfills his cruel streak by tying a long fuse to himself, then light the tail of it and sneak into the building to set fires on gas cans he hid earlier. Rack up scores by setting off as many gas cans as possible before escaping unscathed.

Pyro 2 is not as easy as it sounds. As you walk, the string trails behind you, burning, setting fire to pools of gasoline from tanks you've tipped over as you went, finally walking down the stairs to the next floor, laughing as you go. Unfortunately, the string is burning rather quickly, and having it catch up to you, or brushing up against one of the flaming walls, or being engulfed in the fireballs resulting from the flames reaching the gas tanks, is extremely unhealthy, to say the least. Luckily, the more flames you cause on a level, the slower the string burns, allowing you to escape more easily. Starting off in the IRS building, you move on to the White House, Buckingham Palace, all the way to the Kremlin, occasionally meeting interesting and historical personages on the way. Strangely addicting, and with surprisingly good PC speaker sound effects, this game will keep you coming back for more as the pools of gas spread faster, and the explosions get bigger. Master pyromaniacs get to play the secret missions. Great fun! 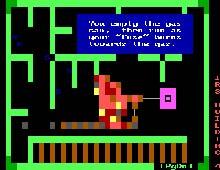