A small fun freeware game this one. More or less a Nibbles-clone, but you got to eat Pizza - well done and enjoyable. Concept is simple, you move your ever growing worm around avoiding the borders of the screen as well as your enormous tail always moving towards the next pizza to eat. Surely not the game you will play for hours and hours over years and years - but it's always nice to get back to it for one or the other round.

One of the best Snakes/Nibbles clones ever made, Pizza Worm is a great freeware gem that has become a cult favorite since its release in 1995. If you haven't been gaming long enough to have played Snakes, here's the basic idea: guide a worm around the screen, eating pizzas (which appear one at a time at a random location) as you go. The more pizzas your worm eats, the bigger it gets. If the worm's head hits any part of its body, it's game over. The goal is simply to stay alive for as long as possible to increase your score (which increases automatically every second).

While the gameplay remains as simple as Snakes, what makes Pizza Worm much more fun than similar clones is the way your worm handles. You need only to steer it left or right to rotate, and the movement is very smooth. The game also features a fun 2-player mode, although it's hotseat only. Excellent VGA graphics round off this addictive old game that you will spend hours with without realizing it ;) The only thing that could have made the game better is different levels or background graphics, but that is a very minor complaint. Without a doubt, Pizza Worm is the best Snakes clone ever made until Digital Eel's Plasmaworm in 2001. 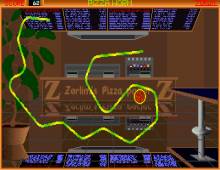