Pipiru the Archer Practice Special is a fun freeware gem from Japan's NOAH, an independent game development group. Released for free to promote their shareware title Pipiru the Archer, this Practice Special game stars Pipiru, a cute archer who is practicing his archery skills. The game has four levels of difficulty, each of which starts you off at different point on the training course.

The gameplay is simple: just move Pipiru around and keep a key pressed to choose the power of your shots, then let go of the key to let the arrow fly. Your goal on each screen is to hit all the apples and apple cores before time runs out. Some apples hang on the tree, while some have already dropped to the ground. To complicate matters, there are moving obstacles such as stone walls or rotating gates that block your shots. Plus, sometimes you have to plan ahead: certain apples can only be hit not with your arrows, but with other apples that hang above them. The game is a lot of fun, mostly because just when you think you have beat it, a new kind of obstacle shows up to make the game much more challenging. You are given three "lives" at the beginning: you lose one life if time runs out. If you like fun, coffee-break arcade games, this cute game will keep you occupied for long after your break runs out. 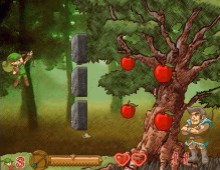