Phobia 2 is a simple but fun top-down shooter by the finnish Wah-Software. You are a space marine with a simple goal: survive as long as you can, and kill anything that moves. There is an neverending swarm of aliens coming towards you with bad intentions, and they will get you sooner or later. There is no real goal in the game, just killing as many aliens as possible before dying yourself.

The game is rather nice looking. Altough there is only two kinds of moving characters (your marine and the aliens), the graphics are more than adequate. Epecially the light effects from explosions and the flashlight connected to your troopers gun and the little body parts and gore from the killed aliens are neat details.

The game is quite challenging, but as you learn how to use the different extra weapons (exploding bullets, flamethrower and grenade launcer) to the maximal effect, you will find your score rise from measly couple of hundred kills to thousands. And the simultaneous two-player mode adds to the fun considerably, if you can get a friend to play with you.

Good production values and playability make Phobia a nice game if your time for playing is limited, or if you just want to quickly kick some alien butt. :) 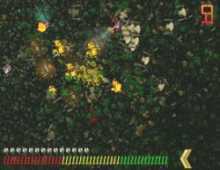