Yet another of really, really old small games. Paratrooper is quite simple and easy game to play. You control a big surface cannon that'sbeing attacked by numerous enemy helicopters, jet planes and paratroopers. All you have to do is shoot at everything you see and try to destroy as many paratroopers and bombs as possible.

Where to start with this game??? It's really one of the most simple fun games I've played when I was 8 or 9.

You're a small cannon (really...) and you have to shoot all paratroopers dropping down out of helicopters. Also shoot the helicopters and the airplanes that drop bombs. If there are 4 paratroopers at one side of the cannon, they will kill you. If a bomb hits you, you will also be dead. Try to shoot the bombs before they can hit you.

It's one of the games that really reminds me of the old times, with very simple graphics and sound, but still being a very great game to play! This could be the best game to play if you don't know what to do and you only have a 386 PC in front of you. Go on! Check it out... 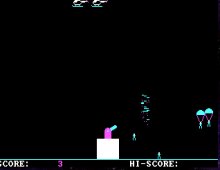 People who downloaded this game have also downloaded:
Paperboy, Frogger, Fury of the Furries, Paperboy 2