As one-key games, both games are extremely easy to learn: you need to press only one key in the whole game. In Wunda Flossy, your job is to guide a cow named Flossy across the landscape, avoiding obstacles and collecting enough coins to clear the each level. There are multiple difficulty levels to choose from, and the game has plenty of humorous elements reminiscent of Llamasoft's classics like Yak Attack.

Ork Attack is not an original game but a superb remake of an oldie Amiga freeware game of the same name, which seems to have been inspired, in turn, by Activision's classic Kaboom!. Your goal here is to drop rocks from the rampart to kill the climbing orcs before they get to you. The game features 7 stages spanning 4 levels, a bonus minigame between levels, 2 bosses, and a lot of blood. Both games are well-designed coffee-sized games that are perfect diversions between more serious gaming sessions. 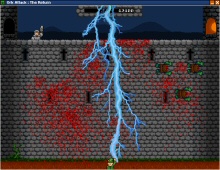 People who downloaded this game have also downloaded:
Nightmare Creatures, LBreakout2, G-Darius, House of the Dead 2, The, Metroid Redemption