Onslaught is an okay platform game from Hewson that is not as original as their masterpiece Nebulus. Essentially, your character must battle his way through sideways scrolling screens of attacking hordes and reach the enemy banner. As the hordes are literally limitless and the platforms are scattered with mines, this proves to be quite difficult. You can bash the enemy to death, or use the magic spells that they drop when they are dead. With the numerous enemies, exploding mines, effects of spells and overly colorful backgrounds, the screen certainly demonstrates the old saying that war is organised chaos. The control system is adequate, and uses the function keys to select the different spells that you have collected. However, the main character doesn't jump very far and moves quite slowly. This can be slightly irritating, and feels like you are leap-frogging to your destination.

Apart from the odd shoot-'em-up sub section now and then, the game is a constant onslaught - hence the name. After you have slaughtered the 500th enemy sprite, it can all seem a little repetitive, and as such is really only suitable for a quick play now and again. Play it for the experience, but don't expect a classic. 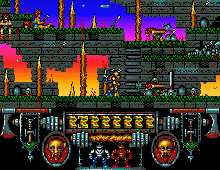