A simple but fun Space Invaders clone, the second game E-Game designed for DOF, Sweden's premier mobile phone company. In DOF Invaders, you shoot keys from the phone's keypad instead of aliens. The numbers shoot "#" and "*" (pound key and star key) at you, and you have four bunkers in the form of human heads to defend yourself. You can earn bonus points by shooting at same numbers in sequence, which make appropriate keypad sound once they are shot (anyone familiar with the mobile's beep-bop-beep sounds when you press the keys knows what I'm talking about). Overall, a fun, mindless shooter that's great to waste a few minutes with. 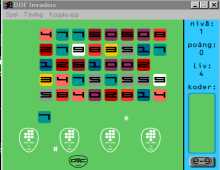