Frequon Invaders is no doubt the most unique Space Invaders clone I have ever seen. The gameplay is hard to describe, so here are the designer's own words: "...your mission is to destroy each invading Frequons by moving the cursor on top of it. What could be easier? Except for one itty bitty detail: the Frequons are not displayed in the usual spatial domain, but in the Fourier Domain. Frequons look like colored waves. Your "self" is a wave too, with opposite polarity. Instead of manipulating some local point on the screen, you manipulate a global wave pattern. You destroy Frequons by achieving destructive interference with them."

Sounds confusing, right? And it is. This is one of those games that are impossible to describe (unless you happen to be an optical engineer or mathematician) because it cannot be visualized until you play it. So, hmm, I will just end this not-much-of-a-review by saying that if you like Space Invaders and psychadelic swirling colors don't give you a headache, Frequon Invaders is a lot of fun (and educational too - I didn't know anything about Fourier Domain until I play this game). It is fun, original, and strangely addictive once you get used to looking at colored waves, although the extremely high 'geekiness quotient' may intimidate some action gamers from trying it out. 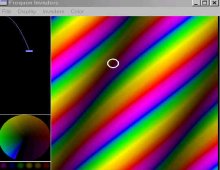