In the increasingly crowded freeware arena, "abstract shooters" are a relatively new type of game that is quickly becoming many people's favorites. These games typically take a minimalist approach to graphics, and concentrate instead on realistic physic and fun gameplay. FlapFlapFlap is one worthy entrant into this field. You play "the Rider," a curiously penguin-shaped creature who has to get rid of the evil Xile and its minions.

Like the title suggests, you must flap wings like a bird to remain aloft, while moving left and right to shoot the enemies. The graphics is minimalist, but well-designed: I especially like the looks of Xile Pyramids and the little graphical details, such as particle explosions how the Pyramids change color from green to red when they are about to die. Your goal is to destroy all of the Xile Pyramids on each level, on your way to destroying Xile itself. In the top left corner of the screen, you can see the number of Xile Pyramids left to kill on the current level, the number of lives you have remaining, and the amount of bombs you have left.

The game is very easy to control with just the keyboard, although repeated mashing of the "UP" arrow is needed to maintain or gain altitude. In addition to the Pyramids that constantly shoot pyramid-shaped projectiles at you, you have to deal with smaller minions, ground-based artillery, and more. One thing I really like about the game is the freedom of movement. While it appears at first to be just another 2D horizontal shooter, FlapFlapFlap in fact gives you a much greater freedom of movement. You can fly left, right, and even down into dark tunnels underground. The screen scrolls very smoothly, and cool particle effects are perfectly suited to the graphics style.

Overall, FlapFlapFlap is a great first effort from Lackey, and a welcome addition to our rapidly growing repertoire of abstract shooters. If you enjoy Kenta Cho's games, N, or a good freeform shooter in general, check out this superb game. 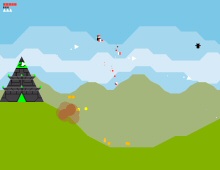