A fairly mediocre jump'n run based on Disney's movie of the same name, which is in turn based on Charles Dickens' classic Oliver Twist. In this Dalmation 101 wannabe, you play Oliver, a cat who is enjoying life in a nice home after being adoped by a kind soul. But then trouble begins when the evil Sykes (voice by Robert Loggia) tries to kidnap you. In scenes reminiscent of Home Alone, you must escape and deal with these bad guys once and for all.

Gameplay is typical platformer-- jump, run, and avoid obstacles. While the graphics and animations are quite good, the levels are much inferior to the clever designs of Disney's platform games (e.g. The Lion King and Aladdin). There is very little variety to break the monotone, so the game quickly becomes repetitive. Not as bad as Beethoven's 2nd, but not much better either. Steer clear of this marginal old game unless you simply must play every Coktel game ever made :) 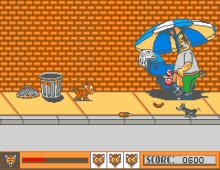