Decent ripoff of Epic Megagames/Electronic Arts' underrated shooter Fire Fight, done by a "warez" group. Fire Fight players will immediately recognize the ships, explosions, and even tiny graphical detail. Gameplay is also identical: pilot a futuristic ship in a smooth 360-degree gameworld, shooting everything in sight, both in the air and on the ground. As a rip, the game lacks plot of any kind, although you can progress from one level to the next after wrecking enough havoc. If you like Fire Fight or free-form shooters in general, New Order is worth a look. Otherwise, steer way clear of this unofficial sequel-- it's smooth, mindless, and fun for a while. No real long-term play value, though. 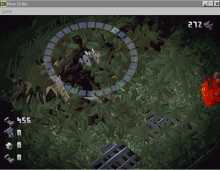