Narco Police is an early version of the quite popular action genre there is today. Of course not with very good graphics and it doesn't get near a game like Wolfenstein 3D. Even though the game got several good idea in the game they haven't been carried out very well. It makes the game pretty dull.

You play as a cop in the future and your mission is run around in different mazes hunting criminals. The game contains several different mazes and missions but it's pretty much the only thing in the game you have to do all the time. And with the poorly done interface in the game it's not much you are able to view in front of your character. There are all these different things to the left and right making your view much smaller but at least the actual radar/scanner that you use is working well and it makes it possible to get a very good overview of where you are and where the enemies are. There are also several different items included that makes the game a bit more fun. But this is only some of the few good things in the game.

As mentioned Narco Police doesn't offer more than the average game and I can understand why Narco Police never got further regarding publicity about the game. Both the graphics and sounds are below average compared to the period and there are too few things to do in the game. Only recommended for the true shoot 'em up fans as other gamers will probably stop the game after 20 minutes.

This game shows where 3D-Shooters come from. Take this as an early attempt. Pretty simple thing, not very interesting over a longer time, but a sure must-try for 3D-Shooter-Fans. It's not bad as an action-game, but there's nothing really new in it except the 3D-aspect. It's not even 'real' 3D as you aren't able to turn 360 degrees, but anyway - quite enjoyable for one or two rounds.

The story? Ah well... as far as I know you are fighting against a drug-cartel on a pacific (?) island - something like that. At least there are several tunnels on this island you got to clean from the paramilitaristic forces trying to kill you.

Narco Police is a fun 3D action game long before 3D is all the rage. As member of the futuristic police team, your mission is to fight drug gangs on various planets, arresting gangsters hidden in deep underground hideouts. Lot of futuristic weapons and items, including a cool scanner you are equipped with make this a fun game despite repetitive mazes. 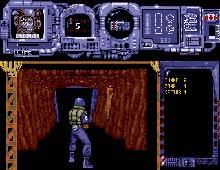 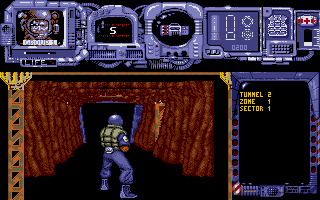