A cute freeware game created to promote Real Media, Nanuk is a charming Frogger clone with a simple idea and gameplay: guide Nanuk the eskimo kid to the other side of the river, where he is reunited with his family. The gameplay is very simple: jump from one ice flotsam to the next until you reach the shore. Some flotsam contains items that give you extra points, while others can make Nanuk trip headlong into the water. As a promotional title, the game doesn't really have any long-term value to speak of, because the gameplay remains the same no matter how many times Nanuk crosses the river. But attractive graphics and cute gameplay makes it a fun way to spend a few minutes relaxing during a short break at the office. 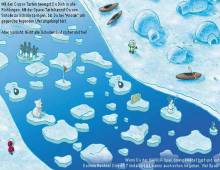