Mystic Midway - Rest In Pieces is a so-so and little-known PC conversion of Philips' game of the same name released on their short-lived CD-i system. The game is basically a shooting gallery with a campy, B movies/TV horror theme - complete with a demonic host called Dr. Dearth, zombies, and other spooky things that glow in the dark.

Like a typical shooting gallery game, your goal is to move a gun across the screen, shooting skulls, bugs, ghosts, and other creeps that pop up at random intervals. Every time you hit a target, you score points. Shooting a target usually results in a creepy animation and sound effect. In some stages, gravestones move across the bottom of the screen to block you shots. Each stage requires a certain number of points to advance, and the stages are wildly uneven in terms of difficulty. Definitely far from the best CD-i game, but at least this PC version is a faithful conversion that retains the ease of use and somewhat-cool graphics. Fun, but only for the first 15 or so minutes. 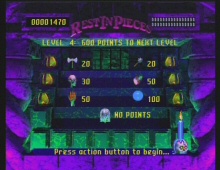