The original Cyberia is an innovative, if unforgiving cyberpunk rail shooter that combines adventure game elements with Rebel Assault- style action sequences. Cyberia 2 is essentially the same, except the 3D rendered graphics have been improved, and the quantity of in-game movies has been increased, although awful voice acting is carried over as well.

Cyberia 2 begins where the original ends. After destroying FWA leader Devlin and his orbital headquarters, Zak (you, the cyber-hacker) and the Cyberia weapon crash land back to Earth, where they are picked up by an FWA team led by the maniacal Dr. Corbin. The evil doctor then sticks Zak into cryo-storage and uses the remains of the Cyberia weapon to create a doomsday virus known as nano-toxin. His FWA employers want the nano-toxin to put down a growing rebel movement, but Corbin wants to use it to kill millions and "reshape the world as we know it". Three years later Zak is thawed out by a renegade FWA Major, and together the two of them have to find Corbin and stop his Sinister Plan(tm).

Similar to Cyberia, Cyberia 2 has plenty of furious first-person shooter sequences. Fortunately, they are less difficult this time (probably Xatrix got too many complaints from gamers who blistered their knuckles or broke the joystick in frustration), although you still cannot save anytime you want. As in the first game, scattered throughout the game are adventure segments. Unfortunately, in contrast to some ingenious puzzles in the first game, puzzles in Cyberia 2 are some of the most prosaic and abstract puzzles you'll ever find. For example, you would expect that breaking into a maximum security compound takes more than just playing a simple game of Simon. Also, it seems silly that hacking into top-secret data archives requires no more than flying through a computerized honeycomb and shooting some stop signs. These puzzles, while nice to look at, are more of a hindrance than a feature. If you like pretty shooters that truly require near-perfect reflexes, Cyberia 2 is your game. Anyone who enjoyed the first Cyberia for interesting adventure portions will be disappointed at the lackluster puzzles in Cyberia 2, and a much higher proportion of action sequences. Worth a play for eye candy and challenging action, but not much else. 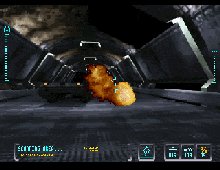