Moonshine Racers is a fun 3D bitmap racing game with nice graphics, converted from the original Amiga release. Probably the best thing about the game is the wacky plot, which is set in the wild, wild west of the U.S. As the manual puts it, "Sheriff Sam and his deputies are real sore now and they're aiming to make life as difficult for Ike and Billy Joe as possible. Here is your change to run moonshine for ol man Tucker. The Pay ain't bad and the life is hectic but fun - provided you keep your sense of humour! The objective in Moonshine Racers is to deliver ol' man Tucker's moonshine to various customers throughout the state."

Gameplay will be similar to Street Rod fans. You begin your moonshining equipped with Billy Joe's basic and beaten up jalopy wagon. But as you gain more money delivering moonshine, you can spend it on new engine parts and tires at Sam's garage. But constantly being chased by Fat Sam and his men soon wears out the engine, and so as you progress, you will need to buy faster and better equipped automobiles. In addition to standard upgrades you can buy (e.g. new engines), you can also buy a map, which will give better information about the route you should take, and even tobacco (the effect of which on the drivers is fun to watch :)). Unfortunately, though, the graphics palette is a bit too muted, so the game looks quite boring against drab desert backgrounds. It's also too easy to speed away from Fat Sam's minions, and each state doesn't look that different from one another. If you're looking for a racer with unique premise, give Moonshine Racers a try. It won't hold your interest for very long, though.

Note: An interesting anecdote about the game: rumor has it that it's based on the Oscar-winning movie Driving Miss Daisy. Negotiations were close to completion until the movie company saw an early demo from the unnamed software house, consisting mostly of a second-rate Chase H.Q. clone, and promptly pulled out of the deal. Malicious gossip has it that the game later re-appeared as Moonshine Racers. Ouch ;) 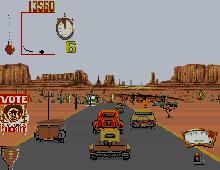